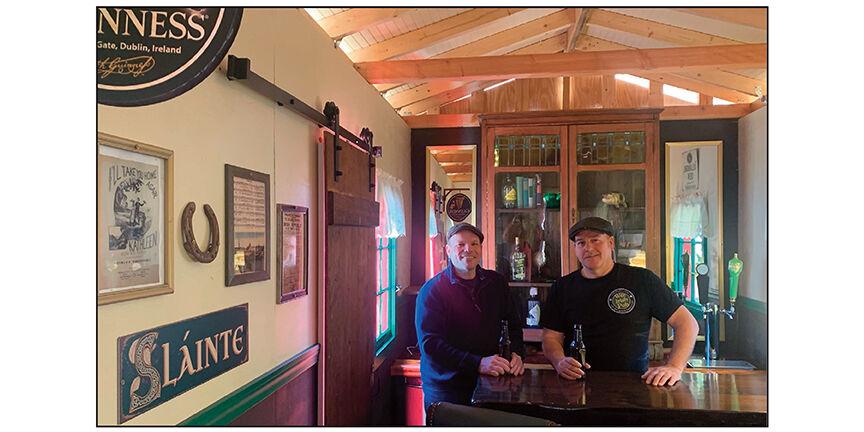 Reading brothers Craig and Matt Taylor knew they had stumbled into something great when they recently brought their 16-foot-by-eight-foot trailer to a client’s house in Plymouth.

With gawker after gawker slowing down to catch a glimpse at the aptly named “Wee Irish Bar”, which the two brothers painstakingly built by hand to look just like a small Irish tavern, they couldn’t believe how many motorists honked their horns and excitedly tried to interact with them as they traveled down the highway.

Weeks later, after being invited to show off their pandemic project at Woburn’s famous Host Lions Club Halloween Parade, the calls from would be customers started pouring in.

“We’ve gotten so many rentals from the Woburn parade,” explained Craig Taylor. “I didn’t expect the reception to be this strong. We’re getting inquiries every day.”

“Excuse the pun, but we thought this whole business launch would turn out to be more of a rolling start. I thought we’d be putting a cover over this thing for the winter, but I guess not,” Matt Taylor added with a laugh during a recent meeting with The Middlesex East.

Until last year, the unique idea of creating a small fleet of rolling micro-bars and pubs to rent for parties and special events was nothing more than a daydreaming whim that Craig sometimes shared with his younger brother after a hard day’s work as a marketing consultant.

Matt, a tech specialist at a digital health firm, quickly agreed the business would be a great retirement gig and soon joined in those hypothetical “what if” planning sessions.

Then one night, as the lifelong Reading residents bantered on about their someday soon business, Matt Taylor’s wife, Dena, jolted the two brothers into action.

“We were sitting around the fire pit just about a year ago talking about what we would do,” recalled Craig Taylor, who would often go visit his brother’s Pleasant Street home for a quick chat. “We had been doing that for a few months and Dena just looked at us and said, ‘Well, are you going to do it or not?’”

That challenge, nothing more than a half-joking jest made as Dena walked by the two brothers, resulted in what would become a pandemic project for the extended Taylor family.

And with no construction know-how beyond Matt’s experience in renovating his own home, the final product, with a small-town Irish village look that even includes a whitewashed, faux-Stucco facade, is a sight anyone can behold by just driving past Craig Taylor’s High Street home.

“It was definitely a family affair. We had everybody helping out,” said Craig, explaining that third Taylor sibling Jon, who lives in London, England, sent hundreds of photos of overseas bar interiors.

Later, Jon Taylor, who is Matt’s twin brother, returned home to Reading to help out with the build.

For bar decorations, the local family insisted upon sticking to traditional Irish Pub decor, including the acquisition of a few pieces of furniture that previously graced the interior of the old Waxy O’Connors Tavern off of Montvale Avenue in Woburn.

“The look can vary, but [when I think about an Irish bar], the overall style really doesn’t. It’s really just stuff all over the walls,” said Matt Taylor of the interior decor.

Add in a few beer taps, a stain-glassed cabinet enclosure for wine and spirits, and a dark-stained wood slab bartop with some high-backed pub chairs, the “Wee Irish Pub” indeed feels like the real thing.

Able to run off of either a standard house electrical connection or a generator, which is provided as part of rentals, the mobile pub also includes a heating system, a small refrigerator, and interior lighting.

As part of their research into Irish pub customs and lore, the two brothers discovered that at many small village establishments on the Emerald Isle, bar owners frequently dedicate their establishments to some of their best dearly departed customers.

With that in mind, the siblings had a custom-made plaque made in memory of Craig Taylor’s father-in-law, Woburn native and longtime Reading resident Fred Doherty.

“It’s a standard practice in London and Ireland. If they have had a patron who had been coming in for years, they put up a plaque in their honor,” said Craig of the memorial sign.

However, so that each customer has a chance to customize the name of the “Wee Irish Pub” for special events, clients can have a homemade sign, complete with a family crest, installed into a frame that sits on the front of the trailer.

Initially, the brothers had also planned on fully staging the bar with alcohol, but after consulting the state’s liquor licensing rules, they realized it was best to keep things simple.

Instead, customers can either provide their own alcohol, or utilize a third-party vendor who will provide all requested beverages and certified bartenders for special events.

“We were advised not to make this too complicated. We’re renting out a trailer, [and we also transport it and help set it up for each client],” Craig Taylor explained.

“We do work [with a professional bartending service]. We tell people if they want their event to run really smoothly, they should just let somebody else stand behind the bar for them,” brother Matt later chimed in.

Now available to be rented year round, the “Wee Irish Pub” can be delivered by the Taylor family to any home, corporate gathering, or other special event that is taking place within a 50-mile radius of Reading. The cost of renting out the mobile pub is typically between $800 to $1,200. For more information, visit the family-run business’ website at tinypubs.com or email Info@tinypubs.com.