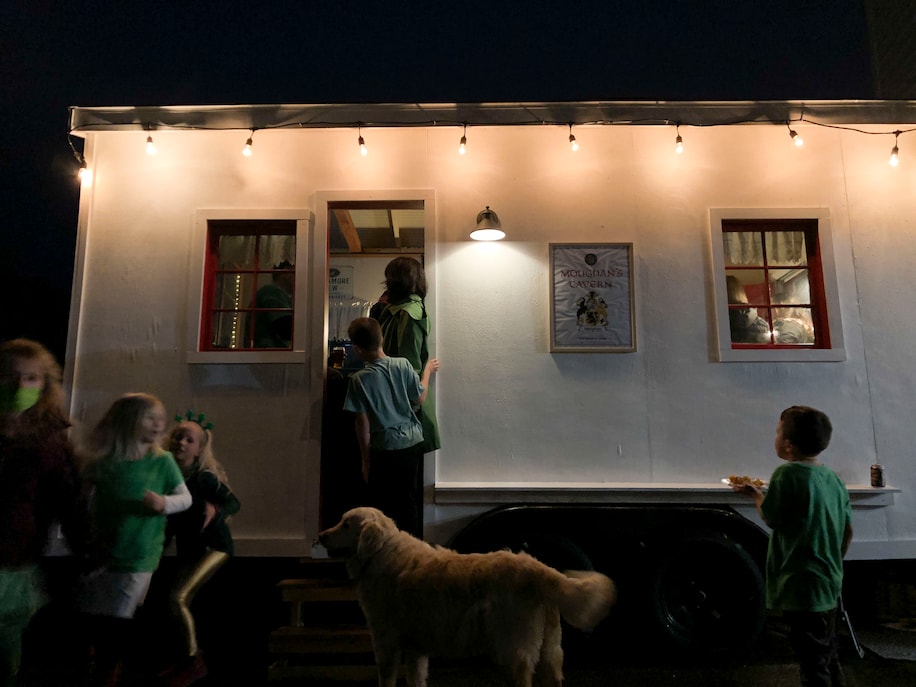 NORTH ANDOVER, Mass. — Everyone at the party could remember how they used to celebrate St. Patrick’s Day.

There had been all-day affairs at local joints like Rolf’s or the Irish Cottage, pints and music with friends and strangers. Or during the pandemic, a quiet drink at home over takeout corned beef.

This, however, was entirely new: drinking glasses of Guinness inside a tiny, meticulous re-creation of an Irish pub parked in a friend’s driveway.

Much like 2022, Thursday’s get-together was both a reminder of how life used to be and how much smaller it has become.

Two years into the pandemic, the virus is in retreat (or maybe not). The White House is reopening for public tours. Masks are coming off in schools. Boston is again holding a St. Patrick’s Day parade.

Meanwhile, the Wee Irish Pub, measuring eight feet by 17 feet, has not stopped moving since word of its existence began to spread early this year. There is something about it that people find irresistible: the intimacy, the simulation of public space, the sense of being transported.

“I don’t know how to say this,” said Craig Taylor, a marketing consultant who built the miniature pub on wheels with his younger brother Matt. Some of his customers have beautiful homes in which they could easily host a party, yet they love the idea of sitting in a little trailer. Craig thinks he knows why. “It’s something different,” he said. “It feels like you could be a million miles away.”

The two brothers, who live in Reading, a town north of Boston, conceived of the pub over many evenings spent sitting around Craig’s fire pit during the pandemic. It would be a way to combine their skills — Craig, 58, has researched his wife’s roots in Ireland and Matt, 49, likes carpentry — and they thought of it as a side business they might take up in retirement.

The entire family pitched in. A third brother, who lives in London, flew over to help build the pub, bringing pictures of taverns in Ireland for inspiration. A sister found the lace curtains and made a custom Spotify playlist. It seats 12 but like any bar, it can fit more if “you just go shoulder to shoulder,” Craig said.

There’s an electric fireplace, a high wooden bar, a small fridge and two beer taps. The walls — cream with green trim — are decorated with carefully selected paraphernalia, including a shillelagh, a traditional Irish cudgel-cum-walking-stick, that came from the brothers’ grandfather’s barn.

The reaction to the project, which cost about $20,000 to build, has surprised them. It rents for between $800 and $1,200 and is booked most weekends into 2023. The brothers just bought a second trailer to convert into another miniature pub. They don’t know of anyone else doing the same thing in the area. (The Shebeen, a company in Ireland, also rents pubs on wheels.)

People are just “tired of sitting at home and doing nothing,” said Matt, who works as a project manager.

On St. Patrick’s Day, the pub was snagged by Liz and Josh Moughan, who learned of it from a Facebook post in January. For the past two years, they had been gathering with immediate family and close friends outside at a new pandemic-era patio. This was their first real party since 2020.

They bought two kegs of Guinness and Josh smoked chicken wings in the backyard. His parents came by, as did his brother, straight from the airport. Neighbors and their children arrived from up and down the street. There were friends of Liz’s from high school and friends of Josh’s from college, including one he hadn’t seen in more than 20 years. A rousing version of “The Rocky Road to Dublin” began playing from outdoor speakers.

The weather — misty, overcast, a brief drizzle — was positively Irish. There was plenty to worry about, from the war in Ukraine to rising coronavirus infections in Europe, but for an evening at least, the mood was exuberant.

Candice McVeigh, 46, a health education teacher wearing jeans and a bright green T-shirt, said she was giddy the whole day at the thought of the party. “This is perfect, it comes to you,” she said, as she stood outside the miniature pub talking to friends. Two years ago, McVeigh recalled, she bought a Shamrock Shake from McDonald’s on St. Patrick’s Day that she cleaned off with a disinfectant wipe.

Justin Cronin, 46, was similarly elated to be reunited with old friends. “Unbelievable,” he said, gesturing at the dozens of people milling around the driveway and the open garage. “Liberating.” He recommended a shot of peanut-butter-flavored whiskey.

The tiny pub might have had some fringe popularity before the pandemic, Cronin speculated, but something about it resonated in this moment. “Things are different now,” he said. “Especially when you never know when the next wave is coming.”

“People feel differently about proximity to each other,” added Timothy Medlock, 60, who lives next door and arrived with his daughter Alex, 28, and two golden retrievers. The private foundation he runs is the only tenant that has returned to in-person work their office building. He and a group of friends just decided to resume their tradition of monthly after-work drinks, but only half of them returned, he said.

As the sun went down, the conversation inside the pub grew blurrier and more animated. Josh, 44, served as bartender and joked about spending the night on one of the cushioned benches. “Scratching a lot of itches right now — friends, the pub, good music,” he said. “It’s very special.”

His wife, Liz, a 44-year-old sales executive, had organized the occasion as an early celebration of Josh’s birthday. Aside from a brief stopover at the Dublin airport, her Irish American husband had never visited the country of his ancestors. “We figured we would bring Ireland to him,” she said.

Early the following morning, Craig and Matt arrived to hitch the pub to the back of a Ram truck. After a thorough cleaning, it was back on the road to its next destination, about 25 miles away, just one of a stream of birthday celebrations, surprise parties and family reunions still to come.