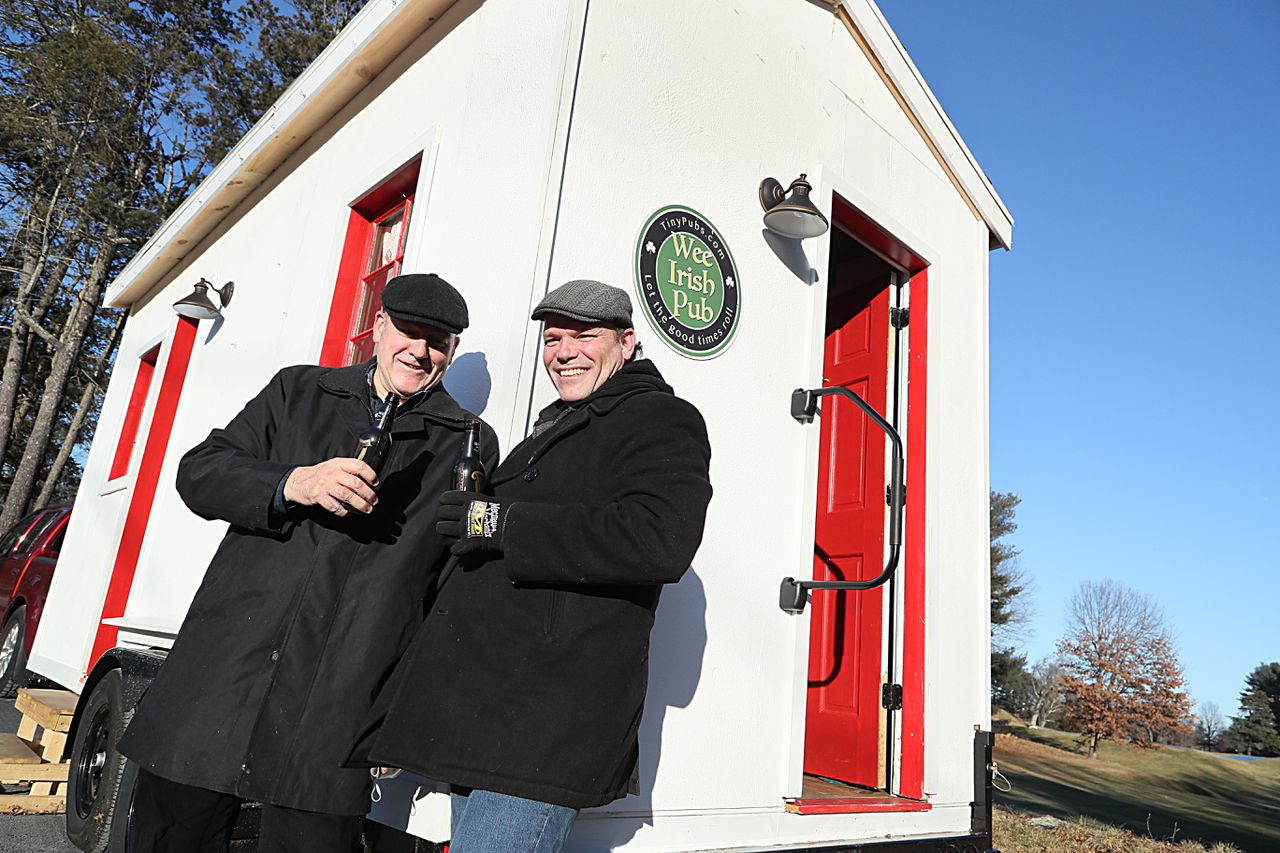 Craig and Matt Taylor, two brothers from Reading, built the 7-foot-by-17-foot traveling pub after coming up with the idea while standing around a fire. The mobile watering hole comes complete with a bar, taps, benches, and Irish décor.

At first, brothers Craig and Matt Taylor thought building a miniature Irish-style pub on wheels, a traveling taproom they could rent for private events and parties, would just be a hobby — a pandemic project that would take their minds off the world’s problems and let people enjoy the familiar comforts of crowding into a bar (albeit a very small one) at a time when it had become almost impossible to do so.

But within days of launching the “Wee Irish Pub” in September, it became clear that the fireside chat-turned-business venture was going to be much more than a side gig.

Looking to celebrate another pandemic-era St. Patrick’s Day, but with a twist? You’d better move fast.

“The floodgates have opened,” said Craig, 58. “We are getting requests [to rent it], at least two an hour, for the last week.”

The idea to construct a tiny Irish pub, complete with a small bar, stools, bench seating, and many of the other features found in traditional venues of its kind, had been in the back of Craig’s mind for years, since he read about an inflatable Irish bar that people could rent for a day in their own backyard.

While he thought he could make the experience more authentic, he never took the leap.

“I had been talking about it sort of as a pipe dream that would never happen,” said Craig, who works in marketing.

But as the Reading residents found themselves spending a lot of time around a fire pit in Matt’s backyard early in the pandemic — one of the few activities that was still safe and allowed — the possibility surged to the forefront, like the head on a perfectly poured pint of Guinness.

“We’d talk about it night after night,” said Matt, 49. “Finally it was like, ‘Alright, let’s just do this.’ It’s kind of the perfect pandemic project because people were having backyard get-togethers and staying outside, and we said, ‘Yeah, this would be perfect for this situation.’”

Last February, after batting around the notion and discussing logistics, they decided to try their luck. They bought a large trailer for the tiny pub to be built on, so it could be towed from place-to-place upon request.

When it was finally delivered in April, they got to work on construction, a joint effort bolstered by Matt — “an IT guy by trade” with a penchant for carpentry.

“I’m definitely more about the overall impression and the ambiance,” said Craig, who took a genealogical tour of Ireland in 2018 with his family, visiting the homeland of his wife’s ancestors. “Matt is precise to the micro inch on making sure that every rafter is exact.”

Brothers Matt and Craig Taylor enjoy a drink inside “The Wee Irish Pub,” a mobile bar that they rent out to customers.

To build the roughly 7-foot-by-17-foot pub, which looks like the popular tiny houses people rent when camping, they sourced materials from online marketplaces like Craigslist, and repurposed and recycled old furniture and other items to try and give it an authentic look and feel.

Their siblings and other close family members pitched in considerably.

Within months, the cozy pub had it all: A Sláinte sign graced one wall, under a weathered horseshoe. A framed map of Ireland hung above an electric fireplace. The small bar was installed, with a refrigerator and taps for kegs. A plaque dedicating the project to Craig’s late father-in-law — who was of Irish descent — went up behind the benches, forever holding a seat for him.

The design of the cream-colored cottage is similar to mobile pubs built by the Irish-based company The Shebeen, which brought one of its units to Boston in 2015.

The Wee Irish Pub, which can fit up to 12 people inside, finally rolled to its first event — a company gathering in Melrose — in September. It hasn’t slowed down since.

“For me it was, ‘Hey this could be a retirement gig in a few years,’” Matt said. “Now it’s starting to look like this would be a job that we could just do — it could be our livelihood.”

The company, officially dubbed “Tiny Pubs,” is based in Reading. But the brothers will deliver the bar to people’s doorsteps up to 30 miles away (or more, depending on the situation).

Rentals cost between $800 and $1,200 per day, with Craig and Matt arriving to help with the set-up in the afternoon and then whisking it away the following day.

While it doesn’t come stocked with alcoholic beverages, Tiny Pubs will refer people to a bartending service if needed, to ensure gatherings run smoothly.

Most people are renting it to celebrate a milestone birthdays and retirement parties, the brothers said. But they recently received one call from a customer who has a terminally ill relative who had always wanted to visit Ireland, but no longer can.

Instead, ”they’re bringing the pub over to her in the driveway, to have a little taste of Ireland,” Craig said. “It’s very sweet.”

Craig and Matt said the lead-up to St Patrick’s Day, long a popular occasion to celebrate for Boston area residents, and most of the month of March is already almost fully booked.

With their sudden success, the Taylors are now thinking ahead, brainstorming ways to expand their niche brand. So what’s on tap for the brothers?

“A Boston sports pub might be next up,” Matt said.