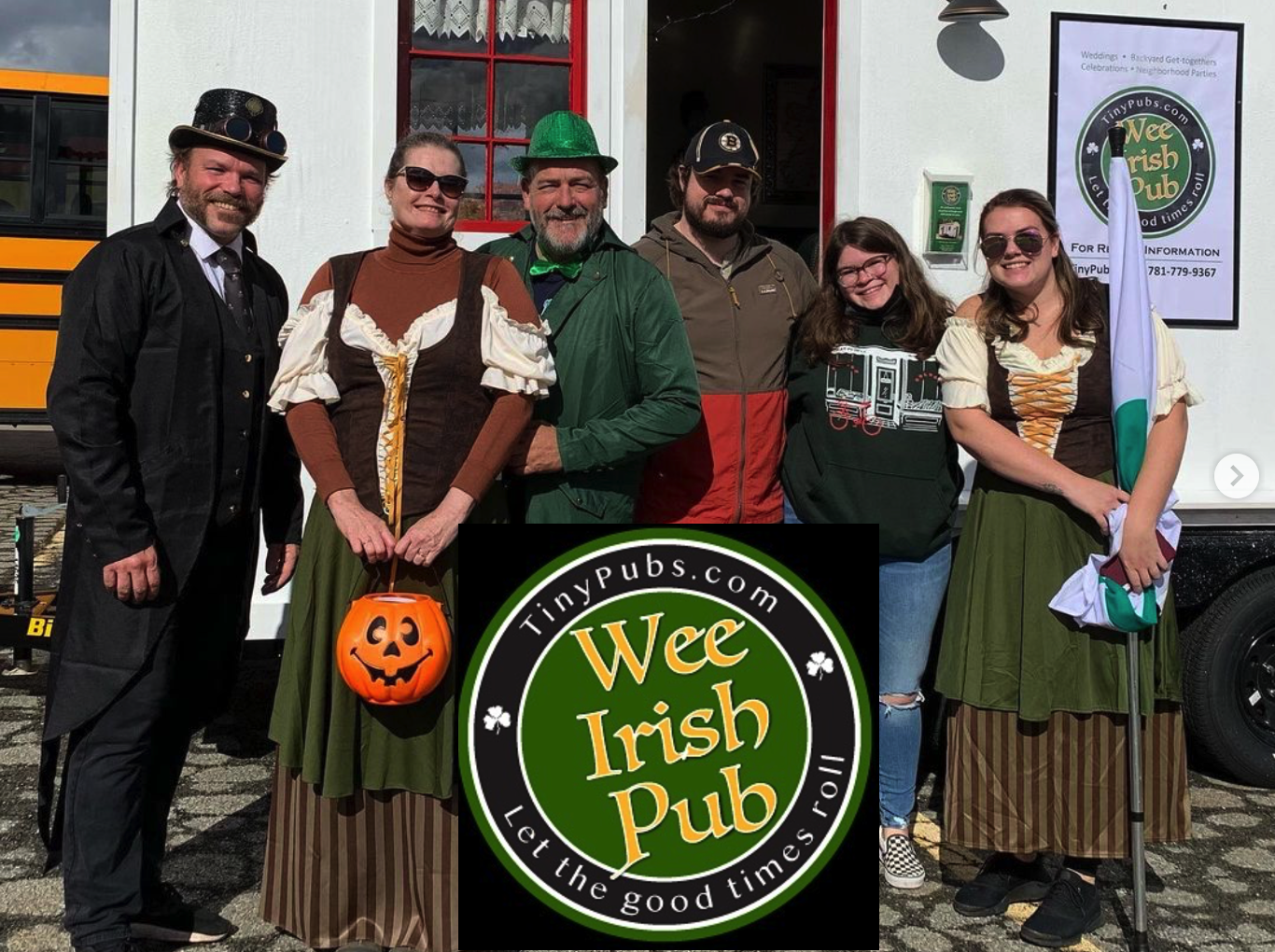 A round of Guinness and the Dropkick Murphys — ain’t Life grand!

Based in Reading, Massachusetts, the Wee Irish Pub is designed to look and feel like a traditional Irish pub and also designed to be mobile. The cozy pub can be delivered within 30 miles. — https://tinypubs.com/gallery/

If you’ve been to a corporate party or family reunion in the Boston area, you may have seen the Wee Irish Pub. But the Pub can be so much more.

You’re not pushing the Tinypub envelope when Uncle Oisin and Cousin Seamus, done tracing the family tree, pound down their umpteenth Guinness and start their naoú round of Whiskey in the Jar.

Be creative! Surprise friends and family, even random passersby! Arrange now for the Wee Irish Pub to deliver a hopsy Gaelic mise-en-scene to the most quotidian occasions.

After flushing your digestive plumbing with a solvent that could blast barnacles off a freighter, you’re approaching Mordor. Soon, the GI doc will weave her fiberoptic camera through your Portal of Shame.

To break the ice, why not treat the staff to a little pre-op bonhomie? Imagine everyone’s delight as the Wee Irish Pub backs right up to your exam table!

Five Murphy’s Stouts later, you wave off the anesthesiologist. By then your doc will be too lit to find your sphincter anyway, so grab your duds and sleep it off on a vacant gurney.

Now you’ve done it! You followed Rodney Lacroix’s advice, and claimed Alexa and Siri as dependents on your 1040. Also, that voice in your head that whispered “Bad move, Einstein.”

Welcome to your tax audit! Lacroix, of course, is ghosting, having retreated to his villa on Cap d’Antibes where he survives on ceviche and manipulating the Unobtanium market

What is it with Feds? Nothing but flinty stares, even after you profer a short stack of crisp Grover Clevelands. Only to buy premium tickets to the IRS Tax Attorneys Annual Comedy Improv Gala, natch.

Before they utter the f word — the five-letter one that IRS attorneys drop promiscuously, their first guess in Wordle — why not wheel in the Wee Irish Puband take the edge off?

After a dozen Kilkenny Irish Cream Ales, you’ll be playing Drunk Jenga and have the Feds hacking into Lacroix’s BitMEX account and dumping his laundered Unobtainium for dryer lint!

A somber moment. The pope’s passing was verified by the cardinal camerlengo. Master of the papal liturgical celebrations has tossed the tourists out of the Sistine Chapel with a lusty Extra omnes. Now the College of Cardinals must elect a pope.

Nine fumata nera later, the two factions are deadlocked and weary. Like NFL coach Kliff Kingsbury, the cardinals are running out the clock. One more fumata nera and they face a whole day of prayer, Di meliora!

What’s this? The chapel doors burst open! Why it’s the Wee Irish Pub! And isn’t that Father Seán Ó Gallchóir, president of the CLG Chloich Cheann Fhaola Gaelic football club, at the wheel? Eight rounds of Scraggy Bay IPA later, the cardinals pick shirts and skins for a little chapel footie, without a care in the world!

You’re the target of a grand jury investigation. Bonus! You just got subpoenaed! Why spend thousands on a buttoned-up defense attorney when $1800 will get you the Wee Irish Pub, six cases of Galway Hooker, and a cameo appearance by the Dropkick Murphys?

Hey, it worked for the tax audit. Erin go Bragh!

The FBI’s Crisis Negotiation Unit prioritizes building rapport with hostage-takers. That’s why their opening bid at a negotiation scene is rolling up a bulletproof Wee Irish Pub. Even hardened criminals can’t resist a round of Nine Men’s Morrisover a pint of O’Hara’s Irish Wheat and a smooth-as-silk Irish Cream cigarillo. Pleasure before business!

You’re east of a remote butte in the rolling New Mexican desert, buying three keys of pure crank from a guy who calls himself Tuco Salamanca even though his name is Olaf Swenson and he looks like Dwight Schrute. There’s such a thing as too much TV. You’re about to pop open the proverbial briefcase when Salamanca whistles. Men armed with Desert Tech MDRs spring out of the shadows.

You’re as cool as your wife when she discovered you drained your Roth IRA for this one last score. Now it’s your turn to whistle. Salamanca squints, frowns. Suddenly a glow of recognition prompts a tentative smile as the Wee Irish Pub pulls up behind an ATV, with Danny Boy echoing softly off the sunset-kissed butte.

Assault weapons are traded in for dripping bottles of Smithwick’s Blonde, and before long you’re all river dancing together in the cooling desert night, howling at the stars.

Worksite immigration raids, hostile dissertation reviews, divorce settlements, even terrorist insurrections at the US Capitol — no event is so divisive, caustic, or rancorous that the Wee Irish Pub won’t seduce the lot of you into tossing back pints of Lough Gill Brewery Wild Irish Gose, linking arms, and harmonizing Boys of Killybegs.

If Tinypubs has any regrets, it’s not building the mobile pub sooner. With a Wee Irish Pub at kilometer intervals along the Belfast peace walls in the 60s, the Troubles might have ceased with the first ecumenical chorus of Paddy’s Green Shamrock Shore.