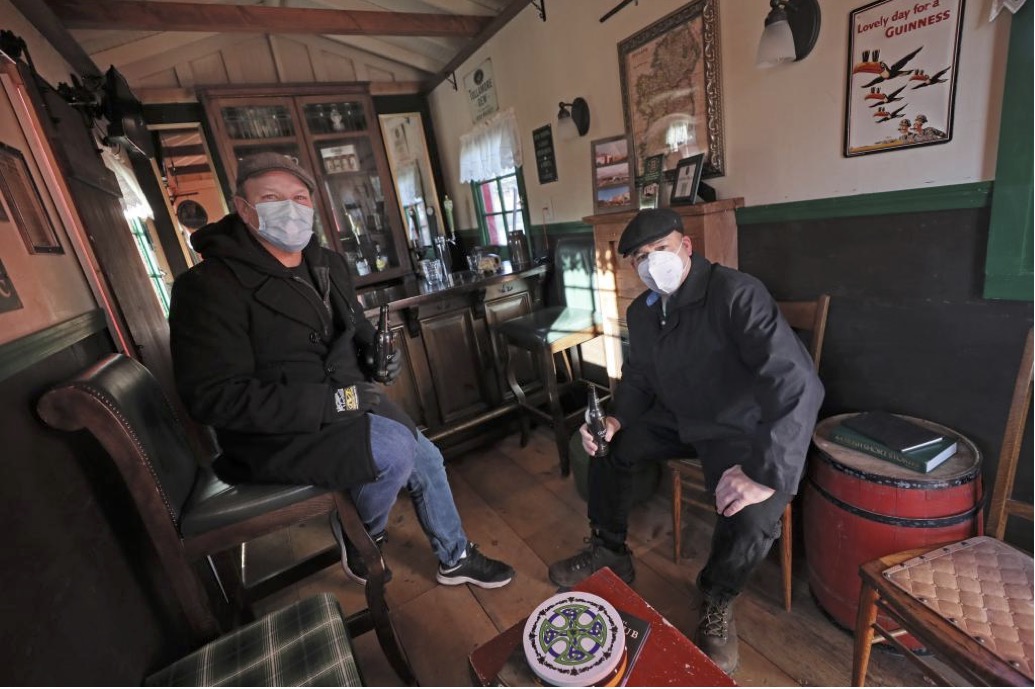 By Julieanne Corr – The Times

The pub, which is built on a trailer, can fit up to 12 people inside and has two beer taps, an electric fireplace, a smart TV, a refrigerator and traditional Irish memorabilia such as a print of the 1916 Easter Rising proclamation and a horseshoe.

“We went to a number of places, including Donegal, Galway and Dublin,” he said.

“I found all the places where they [his wife’s ancestors] lived, the churches and the graveyards — it was really meaningful. We went to some Irish pubs when we were there too. There was this one pub in Inishowen [Donegal] that we loved and went to about three times, it was so classic.

“During the pandemic, we spent a lot of time sitting around Matt’s fire pit. I had been talking about building the pub sort of as a pipe dream as I’d heard about this guy who had built an inflatable pub, and then one day my brother said, ‘Why don’t you just do it’. I went out and bought a trailer and I told Matt I’m ready to go. He agreed to help me out and I gave him half the business.”

The brothers built the entire pub themselves with some help from their families before launching it last September. “I’ve a big family and everybody really pitched in,” Taylor said.

“You can seat four to five people on the bench and we have some tall stools that sit at the bar. We have a Spotify playlist so you can play Irish pub music and we’ve a TV on the wall to watch sport. My wife found an old cabinet that was in rough shape and she spent many hours refinishing it. We now have it as a showpiece in the pub with Irish bottles and other memorabilia.”

Taylor said he spent some time researching items that made an Irish pub look authentic in order to create a “truly” Irish atmosphere.

“We now have a copy of the 1916 proclamation, a horseshoe and a big Sláinte sign,” he said.

“Initially we hoped to rent it out maybe once or twice a month as it was only really a hobby, but now we have more than 200 bookings,” Taylor said.

“People who have Irish heritage really love it. When they book it, they usually tell me a little bit about themselves and their Irish heritage and why this means so much to them. We recently catered for a 90th birthday where the person had always wanted to get to Ireland but they weren’t able to so

this was their way to bring Ireland to them.”

A family who are originally from Ireland, but have not been in the same room together in 30 years are due to rent the Wee Irish Pub in July.

“They’re having a reunion in July and one of the siblings is surprising everyone with the Irish pub. She thinks she can get all kinds of great pictures with the ten of them together. So that is really awesome.”

The pub is also booked out for most of March for those looking to celebrate St Patrick’s Day.